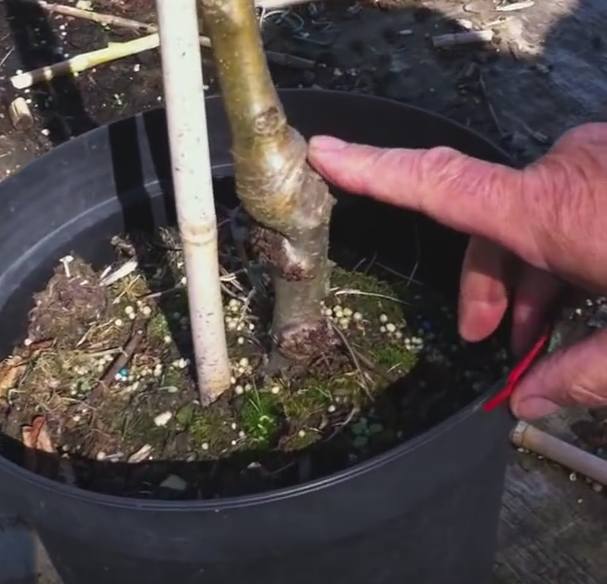 The Graft Point on a Fruit Tree

Unlike Whip & Tongue grafting which is carried out in the winter when the trees are dormant, these methods are used in summer. T budding is undertaken in early summer, June and July, when the sap is rising at its strongest and Chip budding later in the year, September, when things are calming down.

As with all grafting to propagate fruit trees, the basic aim is to fuse the rootstock to the scion (fruiting wood). This is accomplished by joining the cambium layers in both pieces. Cambium cells are like stem cells, they aid in repair and can differentiate into different types of cells as needed.

Once the graft is made you need to hold the parts together whilst they are fusing. The traditional method was that they were wrapped and tied with raffia and then sealed with grafting wax – Tenax Wax.

Modern methods of securing the graft are to use specialist grafting tapes and rubbers or Parafilm tape. Ian explains you can use ordinary rubber bands or even cut a tape from a supermarket carrier bag.

This is carried out in early summer, June and July, when the sap is rising strongly. A bud is removed from the bud stick which is a piece of scion wood. A T shaped cut is then made into the rootstock and the bud inserted into the cut and secured.

The petiole, a small protruding stalk, is used to hold the bud whilst handling the bud. It’s a useful indicator later as to whether the graft has taken.

Chip budding is usually carried out in September when things are calming down towards autumn.

It’s a popular, simple method of grafting where a bud is inserted into a flap cut into the rootstock. It is then secured using the methods detailed above.