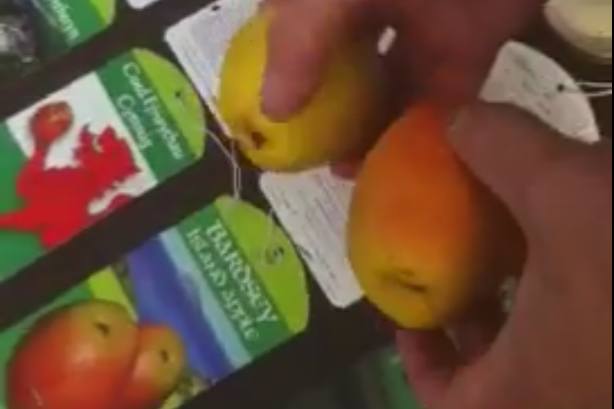 In this video on Welsh apple varieties, specialist fruit grower Ian Sturrock shows some of the varieties he grows and sells from his nursery near Bangor in North Wales

He shows and discusses these Welsh apple varieties in the video:

A rare and unique variety from Bardsey Island. An early eating apple with lemon aromas. The sweet fruit will keep till November.

Unlike Cox’s Orange Pippin, this variety is easy to grow and is disease resistant. It produces a medium fruit with excellent balance of sweetness and acidity.

This is a vigorous and heavy cropping tree, producing fruit with intense aromatic flavour. The flavour is said to be at its best on St Cecilia’s Day (Nov 22nd)

On the night of 2nd January 1825, the Diamond was wrecked on Sarn Padrig, an undersea reef in Cardigan Bay. The cargo of premium apples was washed ashore. Seedlings from these fruit eventually gave rise to the famous Diamond Orchard of Dyffryn Ardudwy.

There is more information on the heritage Welsh apple varieties and other fruits on Ian’s web site where you can purchase specimens. Welsh Fruit Trees