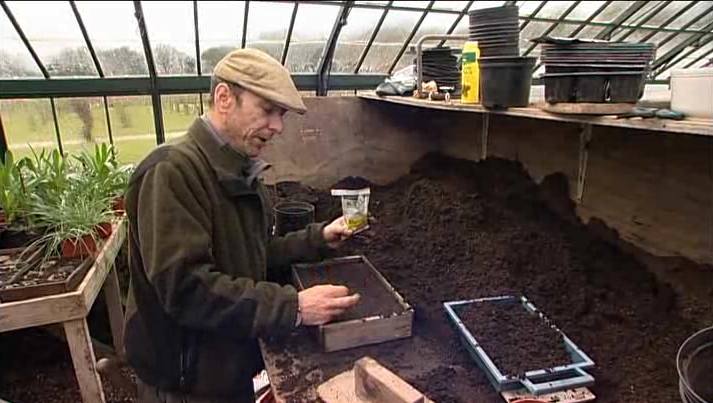 Simon Tetlow deputy head gardener at the famous Tatton Park Gardens shows us how he sows his seeds in trays. Like much gardening it seems simple on the surface but there’s more to it than meets the eye.

Technique is what differentiates the successful gardener from those of us wondering what went wrong! Following this video you might like to see his video on what happens next – pricking out the seedlings

Seed sowing compost need not have much if any nutrition as the seed itself contains the energy to get it started just like a chick doesn’t need to eat for a day as it lives off the egg yolk.

Firm the compost well for onions, lightly for most other plants.

Sow thinly. My grandfather used to say “treat each seed as if it was a shilling” which was quite a lot of money in those days. If you imagine giving each seed the space a shilling or modern 10p piece would take then that is ideal.

Whilst you can use thinly sieved soil to cover the seed you can also use, as many growers do, vermiculite.

Use seed trays with holes in the bottom to allow for drainage and watering initially. Do not water from above, even with a fine rose, until the seedlings are well up. Instead water by sitting the seed tray in a tray of water so it soaks in from the bottom.